Fusion biopsy of the prostate: combination of MRI and ultrasound for detection of prostate cancer and targeted radiation.

When prostate cancer is suspected, systematic transrectal ultrasound-guided prostate biopsy is recommended according to the international guidelines for prostate cancer.

Multiparametric magnetic resonance imaging (MRI) is currently the most diagnostically accurate method for imaging prostate cancer, with acceptable sensitivity and specificity in detecting carcinoma foci as a function of tumor size and location.

Recent results of multiparametric MRI imaging promise even better differentiation between significant and insignificant carcinomas in the future. This not only improves detection, but also serves to assess risk and improve treatment decisions for diagnosed prostate cancer.

Fusion biopsy of the prostate for the detection of prostate cancer is a highly specialized technique that superimposes images from a multiparametric 3D MRI of the prostate, including areas suspicious for cancer, and images from 3D transrectal ultrasound (3D-TRUS).

Findings that are conspicuous on MRI can now be targeted for biopsy.

This can be done either cognitively or by MRI-TRUS image fusion after suspicious areas previously flagged by the radiologist in the MRI dataset are reproducibly located on ultrasound and selected for biopsy in real time.

The current data show an advantage in detecting prostate cancer by fusion-guided biopsy at both initial diagnosis and recurrence.

This image-guided biopsy procedure allows the exact tumor location and local tumor extent to be well defined, so that these tumor foci in the prostate can be irradiated more intensively and with a selectively higher focal dose (boost) during brachytherapy with seeds, with a simultaneous radiation dose reduction in the remaining prostate tissue (= focused brachytherapy).

In the case of a single, very small tumor focus with low aggressiveness, targeted selective therapy of only this single focus (= ultrafocal therapy) or only the affected lateral lobe of the prostate (= focal therapy) can also be considered as part of an individual therapy concept. 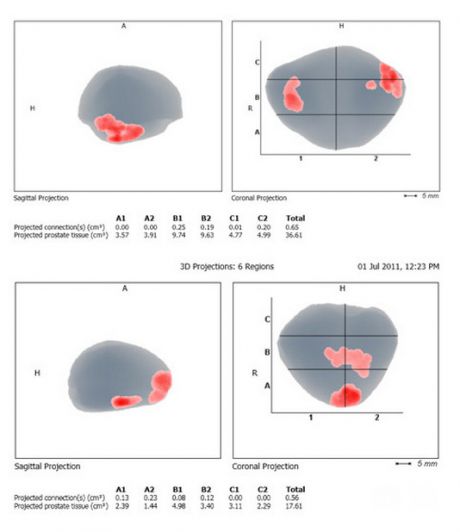 3-D reconstruction of carcinoma lesions in the prostate for targeted fusion biopsy. 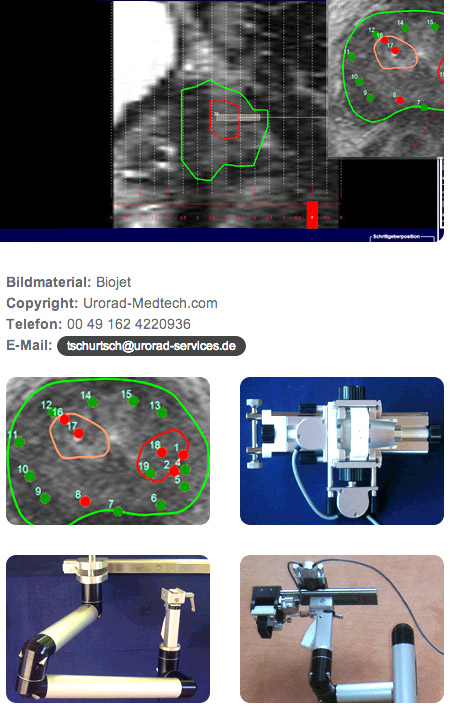